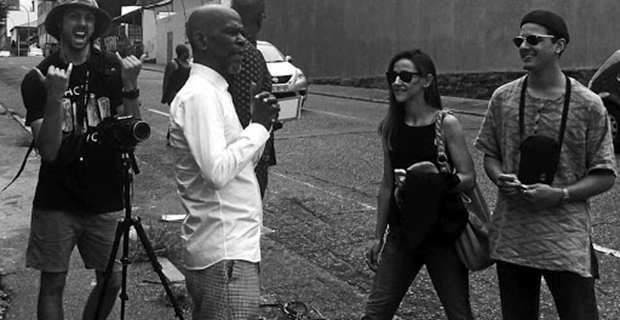 Servicing the music industry has been Black Major’s focus since its launch by former Freshlyground manager Sevi Spanoudi in 2012. The company’s reach stretches into fields such as events, branding, customer service and media.

“I always enjoyed the process of working through ideas, sounds, concepts and visual aesthetic,” Spanoudi said. “Black Major communicates strength and scale. It is a growing business, but it is also hard work and a hard industry to have stability in and do well financially out of. I love what I am doing and I am so inspired,” she said.

Spanoudi has teamed up with Aaron Peters to introduce a record label in 2018. Peters comes from a Cape Town music background. His grandfather had a mixed-race jazz club, Scruples, in Athlone in the ’70s and ’80s where Chick Corea and other luminaries jammed after their shows in the city.

Peters went on to study jazz, but chose music management instead of playing, cutting his teeth with the experimental instrumental band Bateleur.

With a foundation in management, the Black Major record label will be “small, specialised, focused and engage multiple partners to give every release the best chance of success”, Spanoudi said.

“We benefit from partnerships and expansion of our networks both locally and internationally,” she said.

Black Major will also expand into publishing in September 2018. It was preparing a new publishing model to incorporate technology and the marketing of the composers, “in order to serve the best interests of musicians”, Spanoudi said.

The diverse services that Black Major provides are putting it in a unique position in an industry that is changing locally and globally. The internet has disrupted the traditional model of performances to support album sales.

For some artists, social media and the monetisation of the fan-base (an average 5% of fans buy music) have become a sustainable platform. Some online resources have provided for a “do-it-yourself” music industry.

“For the first time in history, the artist doesn’t have to go through a label to get recordings to a consumer,” Nick Matzukis of the Academy of Sound Engineering said.

“The composer doesn’t have to go through a publisher to get compositions exposed. And the artist doesn’t even need a manager anymore.

“Everything can be done with the internet, including self-management and financing through crowd funding. Artists can set up their own label, or sign to a label from a position of strength. They are coming with knowledge, experience, achievement and income. And with success under their belt, they have bargaining power.”

With increased independence in the industry, major record labels have had to shift their businesses to 360-degree representation to survive. This includes management, recording and publishing, allowing the label to administer the profits on artist copyrights and touring as well as album sales.

Black Major will provide the full bouquet of services, but it will be in a selective way, and therefore very different.

“The 360-degree model is problematic,” Spanoudi said. “I would never look to engage one artist into all those services. Major labels have done so and it is a narrow-focused approach. Our approach is to provide the services, but only pick and choose what is relevant for each artist we are working with.

“Every release is different and every artist development plan is unique,” she said.

Black Major represents Cape Town band Beatenberg, which signed with Island Records in 2016. “Signing them to a major [record company] was a good move,” Spanoudi said.

“They are capable of having a hit on a UK and US radio station because the writing is really good and the music has international appeal.”

Work with Durban-born DJ Lag has gone on a different trajectory. His music was released via WhatsApp. The database of cellphone numbers exists apart from the social media fan base and can be used repeatedly. Black Major will be using it to promote voting for DJ Lag at the upcoming South African DJ Awards. “We wanted to be focused, international, underground and immediate,” Spanoudi said. “His audience is very underground and cool kids. They all have cellphones, they don’t buy CDs and won’t necessarily go online to buy music.”

Black Major handles the bookings in Africa for Cape Town-born, Berlin-based Alice Phoebe Lou, who has developed a strong following in Europe for her sensitive acoustic blues sound. “Over the last few years, I have met the most incredible people,” Lou said. “We all support each other very much and that is something that is appealing about Berlin. It is a bit of an anomaly like New York. It is a very free and inviting city for all aspects and attitudes to life. The community-based music scene is lifting each other rather than being competitive.”

Lou will be back in SA in May 2018 to launch her new album and tour the country. Her tour will provide a platform for many young artists to join her in performance and organisation.

“This industry in South Africa is often dominated by older white men who are sometimes very out of touch with the young people and what they are doing,” Lou said.

“It becomes a business model rather than a passion project. By organising the tour on our own, we can make lower-income tickets available. Not everyone can afford to pay for culture and they shouldn’t have to not be included just because of that. Music, politics and social issues can work together,” she said.

Black Major is building a community of artists that share a similar head space. They have collected a unique mixture of live and electronic acts, with an emphasis on “artists who are doing things in different and authentic ways”, Spanoudi said.

Bongeziwe Mabandla, BCUC, Card on Spokes and Christian Tiger School are among the exciting acts on their roster.

For Spanoudi, the brand should respond to the industry’s demands and Black Major therefore put a lot of energy and hard work into it.

“A lot of the work we have been getting over the last year has been on the back of Black Major the brand rather than the artists we represent. Embracing and creating change is a core value. The challenge is to maintain structure and stability internally while growing the business,” Spanoudi said.

Black Major is expanding its artist representation further into Africa with plans to co-produce events, generate visual content and experience new music scenes. Having always had a close relationship with the Igoda Festival circuit, Black Major is exploring a partnership with Sakifo Productions, the driving force behind the circuit.

“The idea is to represent international artists for shows on the continent. We can start it soon for southern Africa and the Indian Ocean [region], but to do it for the whole continent, we need to do a lot of homework,” Spanoudi said.

Its event production is transforming Woodstock in Cape Town into the new capital for live music and filling the void left by the closure of many venues in the city.

The firm is launching a series of gigs in 2018 called Under A, which will take place in the basement of its building in
Albert Street.

This will add to its existing Sunday Edition monthly event at the Old Biscuit Mill.